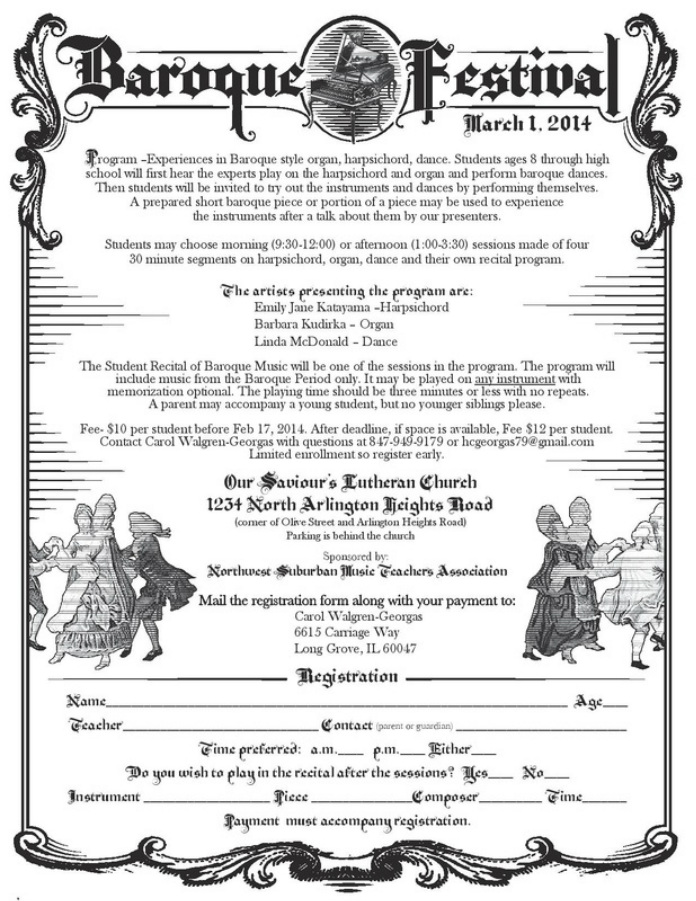 Harpsichord – Emily Jane Katayama maintains a diverse career as a solo and collaborative performer, educator, and lecturer.  She hold a Master of Music degree in harpsichord performance from the University of Michigan, where he studied with Edward Parmentier, and a Bachelor of Music degree in piano performance from the Wheaton College Conservatory of Music (Wheaton, IL).  An active member of the Chicago and Naperville chapters of ISMTA/MTNA, Emily currently serves as the Director of the Piano Academy at North Central College (Naperville, IL). And teaches on the faculty of the Preparatory and Community Piano Program at Concordia University Chicago.

A dedicated chamber musician, Emily is a founding member of the period ensemble New Comma Baroque,  the Antiqua Baroque Consort, has played continuo and solo with orchestras and in recitals in the Chicago area and for the Academy of Early Music series and at the Boston Early Music Festival (2011 and 2013.  She owns and performs on her 1977 William Dowd French single manual harpsichord.

Organ--Barbara Kudirka  majored in music at Mankato State University, studying piano with Mary Veverka and Edward Epple and organ with Dr. Paul Karvonen.  She earned a Master of Music degree in piano performance at Northwestern University, studying with Pauline Lindsay.  In 1995 she became the Minister of Music at Trinity Lutheran Church  in Rolling Meadows, serving as organist/pianist, choir director and children’s muic director.  She became Director of Music at Holy Trinity Lutheran Church in Glenview in 1999  where she plays the 36-rank Gabriel Kney (1996) pipe organ.

Her chief musical mentor has been Menahem Pressler , Distinguished Professor of Piano at Indiana Universiy, with who she has studied piano in master classes for the last 25 years.  Currently, she receives organ coaching from Margaret McElwain Kemper (Music Institute of Chicago and Northwestern University.

Dance--Linda Daniels McDonald is Director of McDonald Dance Academy in Arlington Heights.  She received her early ballet education from noted instructors such as Anida Sedala, Ruth Page, Gus Giordano, Fernado Schauffenberg, Barbara Copeland and Jerry Bywaters Cochran.  Performing with such artists as Edward Villela and Rudollph Nuryev further enhanced her educational experience.  Linda received a fine arts degree in ballet from Texas Christian University, was a soloist with the Fort Worth Ballet Company, and danced with the Fort Worth Opera under the direction of Marina Swveltova.  She danced in Summerstock with the Music Theatre of Wichita, Kansas.  She taught at Dance Center North, Northbrook Dance Center and Dance Variations Workshop in Palatine until opening McDonald Dance Academy in 1994.  Linda is actively involved with Dance for Life in Chicago and a member of C.N.A.D.M. Board of Directors.  She directs the Arlington Dance Ensemble and her students have gone on to receive dance scholarships, to major in dance at college and to dance professionally.  Linda has created choreography for many local theatre groups, including four St. James musical productions.  She lives in Arlington Heights with her husband and three children.